Person/persons/event to whom the monument is dedicated

Soldiers who died in World War I

Location in relation to the surroundings

The monument is situated in the Carol Park, on the Hill of Filaret, in front of a mausoleum that was built in communist times and was initially called 'Monument to the Heroes of the Struggle for the Freedom of the People and of the Motherland, for Socialism'.

Text of the inscription

Here lies at rest happily unto the Lord the Unknown Soldier, who sacrificed his life for the unity of the Romanian people. On his bones lies the land of united Romania. 1916–1919

The Monument to the Unknown Hero is a funerary ensemble made up of a crypt covered by a stone slab decorated with floral sculpture, a cross and a candle with an ever-burning flame.

The circumstances of unveiling

The initiative for setting up the Tomb of the Unknown Soldier belonged to the Society for the Tombs of Heroes, which was established in 1919, under the patronage of Queen Marie of Romania, for commemorating soldiers who had lost their lives during the First World War. The coffin with the bones of the unknown soldier was chosen in Mărăşeşti by a war orphan out of ten different coffins, who upon pointing to the chosen coffin said these words: 'This is my father!'. The monument was unveiled on May 17, 1923. After transporting the coffin to the Bucharest North railway station and placing it in the crypt, an impressive ceremony took place, which was attended by Kind Ferdinand I, Queen Marie of Romania, Prime-Minister Ionel Brătianu and representatives of the diplomatic corps. Upon lowering the coffin in the grave, a 101-gun salute was fired and public activities ceased for two minutes. The funerary ensemble was erected in 1927 based on plans by sculptor Emil Willy Becker.

In order to set up the „Monument to the Heroes of the Struggle for the Freedom of the People and of the Motherland, for Socialism”, communist authorities moved the monument in the Mausoleum in Mărăşeşti, where it remained until 1991, when it was brought back to Carol Park and placed in a temporary location however. It was only in 2006 that the Tomb of the Unknown Soldier was relocated to its initial location.

Commemoration ceremonies are organized yearly on Heroes’ Day (celebrated on Ascension Day) and on Romania’s National Day (December 1) at the Tomb of the Unknown Soldier. 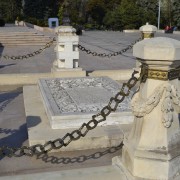 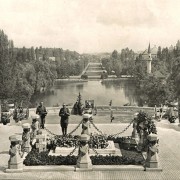 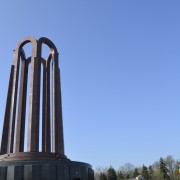 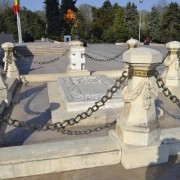 The aim of the project is to show how public space is used to tell about past - or a certain version of it.